It’s looking like Casey will be included in the osteosarcoma vaccine extended field trial expected to start in late April.  He needs to complete his Carboplatin chemo and be free of lungs mets, so our fingers are crossed that everything continues as it has.  Next X-rays are about three weeks out, so . . .

This question is perhaps better posed in the forums, but for those of you who used Carboplatin, what was the dosage per meter squared and frequency, 2 weeks or 3?  Casey had his second dose at two weeks, and depending on blood count, will have his third 19 days later.  I’m thinking of just moving him to a 3-week schedule after that as it dovetails nicely with the expected vaccination cycle.


To remove ads from your site and others, upgrade to a Tripawds Supporter blog!

Soon after his diagnosis, Casey started shedding.  Now, Goldens shed, but this was ridiculous.  We were covered in fur.  Not clumps, but individual hairs.  The vet explained that this was stress shedding due to the combination of his pain and the cancer, and Casey was in distress.  It was amazing how his condition had deteriorated in the week from his diagnosis, even with tramadol and Rimadyl.  You could see it in his eyes, and the way he would hold his sore foot out to us asking if we could make it better.   Little did he know what was coming.

After amputation, there was discomfort from the surgery and the incision, and it was awkward getting around, but Casey was doing okay.  He only yelped or whimpered when we picked him up or moved him the wrong way, and that seldom happened.  We used the topknot on his T-shirt to support him, and that bore the weight just behind his incision and in front of his plumbing.  We’re two days past surgery, and figuring things out.  I sat with Casey and explained that we’d made the big hurt go away, and while that hurt was just going to get worse, this new hurt was going to get better.

The next day, we realized Casey had stopped shedding. 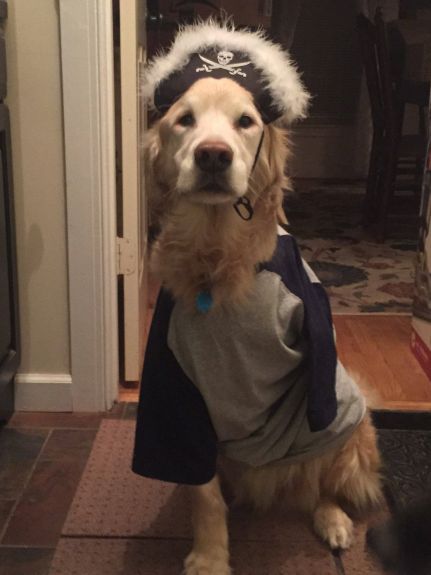 Casey was pretty zonked, and made it through that first night without issue.  He slept in Jake’s bed, penned into a corner, and I slept next to him on the couch.  The vet was right, and Gabapentin is powerful stuff.  Now, we had to learn how to deal with a TriPaw.  How do we maneuver this (now) 53 pound dog and help him to his feet?  I carried him outside and stood him up for the first time with a long pillowcase under his abdomen for support.  He was able to urinate and we carried him back in, offered him breakfast which he refused, and elevated a water bowl on a stool.  He drank heartily and got his first cupcake with sprinkles.  This was a little square of bread with peanut butter, topped with 200 mg Gabapentin, 100 mg tramadol, and 50 mg Rimadyl.  He gobbled that down, put a T-shirt on, and it was back to his corner.  He didn’t really move all day, but at dinner time, I carried him out with his brothers while Ann put out kibble.  Casey came in and ate his normal portion, had a drink, ate another “cupcake”, and went back to bed.

He never demonstrated acute pain, but he did pant at times, telling us he was uncomfortable.  Still, he was resting easily with occasional stirring, and as the night progressed, I carried him outside to take care of business, and when we came back and I lied him down, he worked his way up into a sitting position for the first time, and looked out the window.  He was in dreamland, in the glow of the Christmas lights, watching the snow flurries through the blinds.  He sat there for over an hour, wondering what the heck had happened, and what his new life was going to be like.  He’d been a Tri-Paw for just over 24 hours. 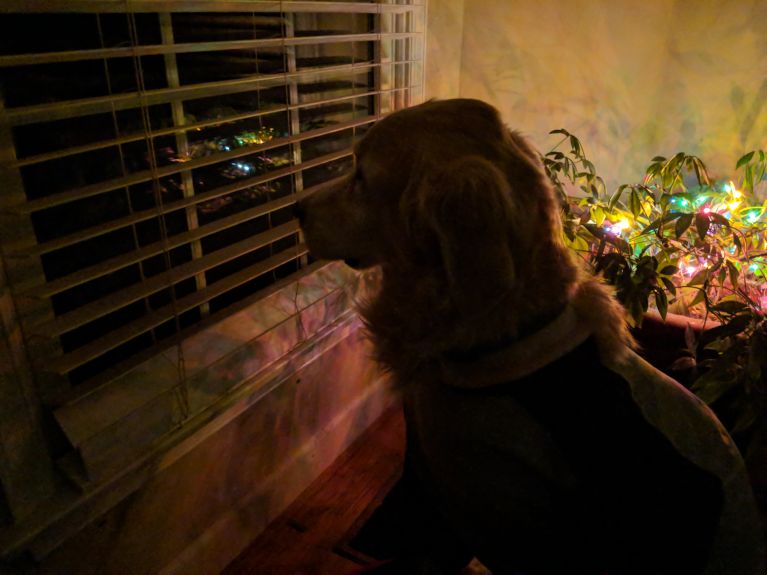 We planned on travelling to Chicago to spend Christmas with our son and his wife.  Well, we can’t leave two dogs in hospice with a dog sitter, so Ann and Steve went to Chicago and I stayed home with the dogs.  They would return late, the night before surgery.  I started researching hospitals.  Prices were looking like $1,500 per night, minimum, with no guaranteed ceiling.  That wasn’t going to happen, so we made plans to bring Casey home the day of his surgery.  Ann woke me at 5:30 on A-Day and said “Maybe we should put both dogs down together.”  GOOD MORNING!  We talked about it as we fed the dogs and got ready to go, and I convinced her it would be too traumatic to lose half our pack in one day.  Still, I was very concerned about bringing Casey home same day.  The surgery center could not administer fentanyl, and we would be managing pain with Gabapentin, tramadol, and Rimadyl.  Will that be enough?  The surgeon assured me that Gabapentin is very powerful, and we should be okay.  So . . . twelve days from diagnosis . . . here we go.  I’ve got a great video of Ann and Casey walking into the surgery center, and I’ll learn how to add that later.

We were supposed to pick Casey up at 4:30, but at 4:15 they called and asked that we wait until 5:30.  Everything had gone well, but other procedures as well as Casey’s had taken longer than expected.  At 5:15 they called and said let’s make that 6:30.  Of course, we were getting nervous, but were assured everything was fine.  At 6:30, we were escorted to the waiting room and told it would be a little bit yet as Casey was still coming out of anesthesia.  They brought him out at 8 PM.

I was a little irritated until I figured out what had happened.  This is a 501 (c) 3 operation that does general surgery but is primarily a spay and neuter center.  They’d made time in their schedule for Casey, and would be closed for the next five days with the weekend and New Year’s holiday.  Not only had they made time in their schedule, but they stayed three hours late and kept him on IV pain relief as long as they could to help him make it through that first night at home.  Anicira Veterinary Center, you are our heroes.

Here’s Casey, at home after his surgery: 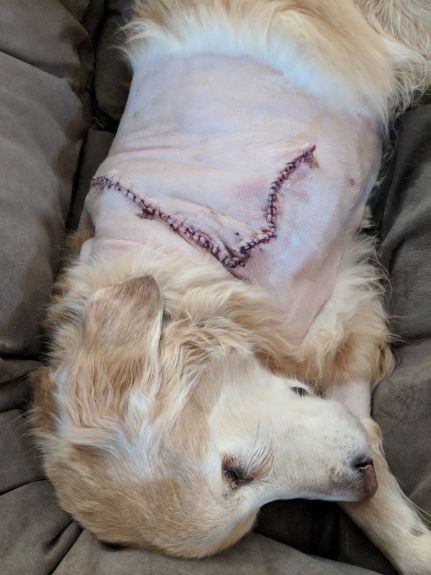 The vet told us ” A few weeks, maybe two months”.  We were aghast.  Casey was still running and romping and eating and wagging and how can this be?  “This is a very aggressive cancer and extremely painful.  He will likely suffer a pathological fracture and you’ll need to amputate or say good bye then and there.  You could amputate now, but that doesn’t buy much time.”

Stunned, we made our way home, and I told the story on FaceBook.  A friend responded immediately “You might be able to save him.  PM me if interested.”  That’s when I learned about Stereotactic Radiation followed by chemo.  His beautiful white shepherd did that at the University of Wisconsin and saved his leg.  Unfortunately, the leg broke during a follow-up biopsy and he became a TriPaw regardless.  Still, videos indicated he had a great life.  Hmmmm!

Where else can we have this done?  We live in Virginia but have family in Madison.  I reached out to UW first, and the response was outstanding.  A researcher there called me within hours and shared so much information.  They would certainly consider Casey for their program after a CT scan and biopsy, he would receive his radiation treatments and then carboplatin.  It seemed we would be $4 to $5,000 out-of-pocket, plus travel.  That’s a lot of money, and with Christmas just around the corner, the timing was awful.  We didn’t see any studies in our area.  UW referred us to a local oncology center, but they couldn’t see us for three weeks, and the clock was ticking.  Amputation?

A little research and we found Tripawds.  What a wonderful resource, and so many people with so much experience and so much hope.  Everything was spinning, not out of control, but it was unclear how much control we really had.  Tripawds gave us something to hang on to.  Maybe amputation is the way to go.

My neighbor is a veterinary surgeon, and quoted me $3,500 to $3,700 plus for surgery, which would buy us four, maybe six months, but it would take care of the tremendous pain immediately.  What to do?  Jake is already in hospice, living on tramadol and Rimadyl with his back, and now Casey’s in hospice, sharing Jake’s drugs and protecting his leg.  Is it time to send them both to the bridge?  With more research, we found an outpatient surgicenter that would remove the leg for $700, but outpatient?  Really?  Well, a pre-surgery consult was $15 and we may as well talk with them; one of Casey’s weeks has gone by.  We spoke with the surgeon who said Casey was definitely a candidate, but it’s December 21st, holiday hours are limited, and there’s no chance do this until next year.  Two more weeks of “Boy in the Bubble”, really?  We felt so helpless, with the cancer in control.  We need to remove this leg if that’s what we’re going to do.  The surgeon checked the schedule, talked with her boss, and said they could schedule him for the following week.  You might look into a hospital that can keep him overnight. 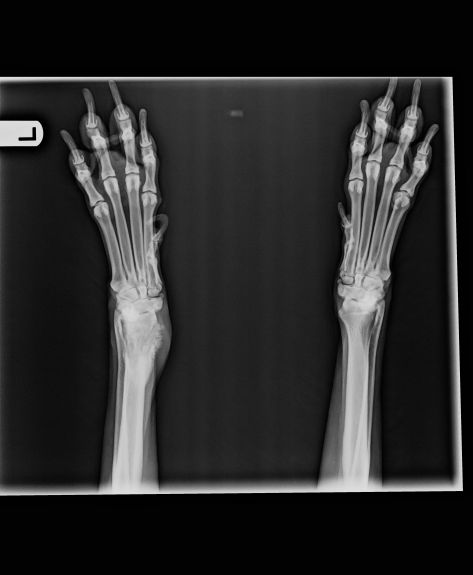