Hemangiosarcoma is nasty!  Jet’s revision surgery was in February and by early April, his lump returned and was growing fast.  We looked into additional treatments, and elected to ride things out.  It was a pretty short ride, and when he passed, his pea-sized lump had grown to the size of a baking potato and as his vet said, “All it’s eyes are sprouting.”  I won’t go into all the details unless asked, but our vet is wonderful with pain meds and Jet was comfortable to the end.  He swam last week, and walked a mile with Bode and me the night before his trip.  The last straw was cranial involvement and bleeding from his nostrils.

So, three dogs lost in 13 months.  Talk about holes in your heart.  Ann had been looking for puppies for a while, and called on some locally Wednesday morning.  Yesterday, I was napping, dreaming that Jet was next to me and I was scratching behind his ear when my phone rang.  It was the local guy . . . you can come out now if you’re still interested.

May I introduce you to Rex and Rosie . . . That’s Rosie on the top.  Their mom is a Golden and their dad is a German Shepard. 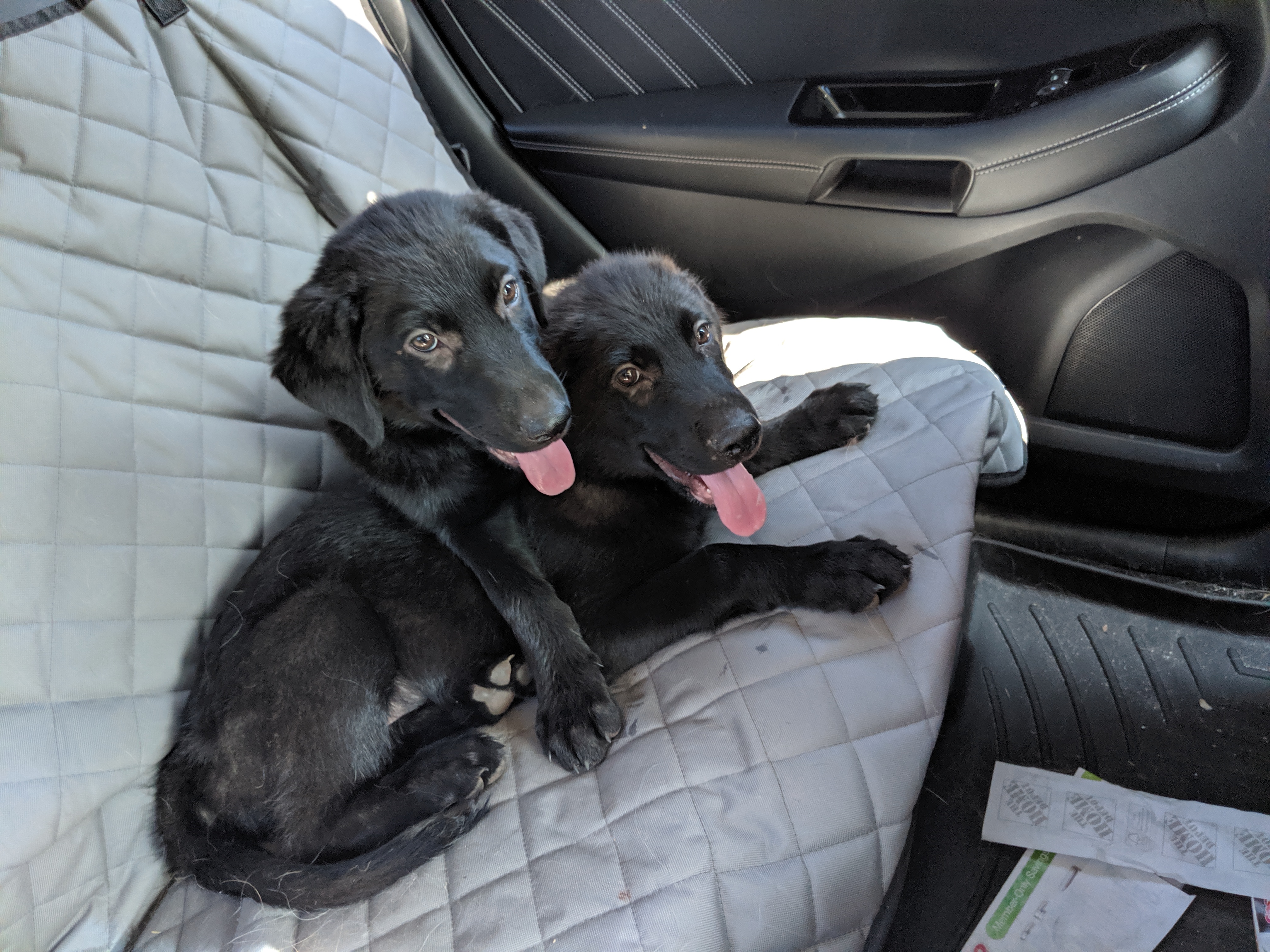 No real surprise, and we’ll just have to stay on top of things.  Jet continues with his mushroom supplements and K9 Immunity Plus, all at therapeutic (doubled) doses.  I’ll talk to oncologists but I’m not sure additional chemotherapy will be possible or warranted.

He’s definitely feeling better and enjoying being a dog, so we plan to let him do that.  His oncologist felt the original surgery plus doxorubicin bought him 1,000 days.  This tumor was very small and hemangio in this location is not highly metastatic.  We retain our optimism as well as our vigilance.

We picked Jet up yesterday and the vet is optimistic.  The tumor itself was quite small (still pea sized) but apparently other tissue was encapsulating it (isn’t the body amazing).

He’s resting comfortably now, and you know what they say about sleeping dogs . . .

Jet is at the vet for revision surgery on his hemangiosarcoma tumor.  His margins weren’t clean after the original surgery, but we’d hoped that chemo would kill what was left.  No such luck.  Started feeling a pea sized mass a few weeks ago, and now it’s grown to a marble, clearly imbedded in his chest wall.  He’s been his happy, healthy, energetic self, and his whiskers even started growing back.  In fact, Ann thinks his fur is thicker than it ever was.  Guess it’s time to call his oncologist and see where we go from here.

Casey came to me overnight, thanks to FaceBook.  I opened FaceBook this morning to a video memory of Casey from a year ago (two weeks post-amp).  He was running to me from across the yard, just bounding, with his tail wagging and a big ol’ Golden smile on his face.  My Golden warrior, but what it really showed me was how much he’d declined with the paralysis over his last two months, and especially the last two weeks.  This video showed me we really had done the right thing sending him to the bridge.

I have another video from the vet, the day he left us.  I’d carried him in and they’d arranged a bed for him in an examination room.  I set him on the bed and we fed him a cheeseburger and some ice cream with chicken treat sprinkles.  He was one happy boy (Ann assured me he had an ice cream headache having downed about a cup of ice cream in one bite), but he was enjoying the attention.  This is when I explained that at the bridge, he’d get his arm back along with the other stuff we’d cut off, and that the girls were going to be really happy to see him.  That video haunts me, because he was so happy, but it had gotten to where he’d whimper at times when I lifted him, and I believe he was also whimpering at frequencies we couldn’t hear because Bode would get so concerned about his brother.

As my brother so wisely put it “He couldn’t dog anymore Tom.  Aren’t you glad you were able to send him off before his life grew miserable?”  I am glad, but Ann and I both miss him, a lot.